Gundagai is a small rural town located in the southwest of New South Wales on the banks of the mighty Murrumbidgee River. A town rich in history, a visit here is like taking a step back in time. 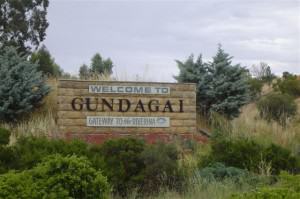 Part of the traditional land

s of the Wiradjuri Aboriginal people, the first settlement was began here in 1829 and the town is well known for the number of bushrangers who frequented the area in colonial times.

Outlaws such as Ben Hall, Frank Gardiner, and John Gilbert ranged throughout the area but Gundagai can lay claim to its very own home-grown, so-to-speak, bushranger in Andrew Gordon Scott, better known as Captain Moonlite. From a wealthy family he was as bad as any conman or robber in his day. We checked into the Gundagai Tourist Park ([star][star][star][star]) in the early afternoon and settled into our cabin.  After some of the “budget” ones we’ve stayed in recently, this one is positively palatial. A quick drive into town to visit the information centre was next on our list and we were quite surprised at how good the town looked after the recent floods. Even though 99% of the floodwaters are gone there is still plenty of  evidence of the flooding but the folks here have done a fantastic job of cleaning it all up. We had dinner that night at Lott’s Family Hotel in the main street in town. The food was delicious even though only standard pub fare but it wasn’t too long before the dining area was taken over by a large, and rowdy, family group and so we left early. 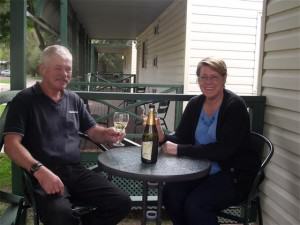 It was still daylight when we arrived back at our cabin and so we sat outside on the balcony with our bottle of Two Tails Sparkling Wine to toast our first night here but it had been a long day and it wasn’t long before we were off to bed. We awoke the next morning to absolutely freezing conditions and it’s not even winter yet. Don’t know if I’d like to be here in the winter, I’m not a snow-bunny! I hoped the day would warm up before we set off to explore Gundagai but it wasn’t to be and so, rugged up to the eyeballs we set off.  Well, believe me, it didn’t take long; this town is not what you would call large but it is interesting.

There are so many historical sites here and I couldn’t wait to see the old railway viaduct and Prince Alfred Bridge, and the historical railway station, to name a few. The Prince Alfred Bridge is the longest wooden bridge ever built in Australia. Built in 1866, it was completed in 1869. It remained in use for 110 years until it was replaced in 1976 by the Sheahan Bridge. Along with the adjacent railway viaduct that was built in 1901, it has been classified by the National Trust. The old railway bridge was built in 1902 and is one of 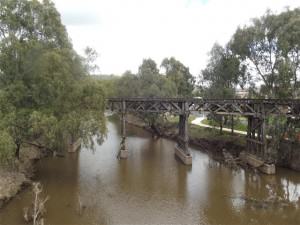 the longest railway bridges in the world at 819 metres long (2687 feet). The railway line reached Gundagai in 1886 and was closed a hundred years later in 1986. The railway station was built in 1885. Featuring the only slate-roofed goods shed in New South Wales, it is also the largest timber railway station in the state. Today the bridges are in disrepair although much restoration work has been completed by the Heritage Council, and the railway station is a museum.

One of the best places to see all of Gundagai is from the lookout on Mt Parnassus. We drove up the steep incline to the top and we certainly weren’t disappointed by the view. It was outstanding, the river and the mountain ranges were just breathtaking but the wind was blowing hard and it was very cold and it wasn’t long before we retreated back to the relative warmth of the car. St John’s Anglican Church, built in 1861, is just down the road from the lookout road. Built of local asbestos stone, the interior and roof were destroyed by fire in 1975 but it has since been restored to its former glory. A little further along the road are three interesting brick houses 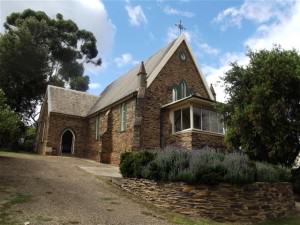 known as the “Plantation Cottages” and one of these, built in 1873, is thought to be the home of the first Anglican minister. The local catholic church, St Patricks, was built in 1885 and stands in the main street. The wind had died down a little that afternoon and we set off for the Rotary Lookout in South Gundagai for some more outstanding views but I think Mother Nature was waiting for us to do just that and the wind returned with a vengeance.

We’d stopped in at the local information centre on the day we arrived and now we decided to return and have a look at some of the remarkable historical pieces there. The centre is home to a magnificent marble masterpiece by monumental mason Frank Rusconi, the sculptor of the famous Dog on the Tuckerbox. This unique miniature cathedral is built from almost 21,000 individual pieces of marble, each piece cut, turned, and polished by hand. It stands at 1.2 metres (4 feet) high and took 28 years to build which is not surprising but what is surprising is that no plans or drawings of the piece have ever been found if, indeed, they ever existed. 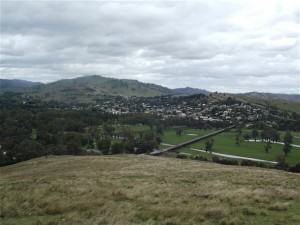 View from the Rotary Lookout in South Gundagai

The next day was our last for this visit to Gundagai and we took one more drive around the town. The flood damage in some of the areas is devastating and one road is still closed by a fallen tree but, even though the river is still up and is flowing fast it is clearly receding. But we couldn’t leave Gundagai without making a stop at the iconic Dog on the Tuckerbox. Like much of Australia’s folklore the origins of the dog are clouded in mystery but we do know that the statue was inspired by a bullock driver’s poem which celebrates the life of a mythical driver’s dog that loyally guarded the man’s tuckerbox (lunch box) until death. The legend was born in the 1850’s and its popularity spread throughout the colony and then it was immortalised in 1937 when Jack O’Hagan wrote his song, “Where the Dog Sits on the Tuckerbox, 5 miles from Gundagai”. The original monument was erected in 1926 but a new one was commissioned a few years later. The dog 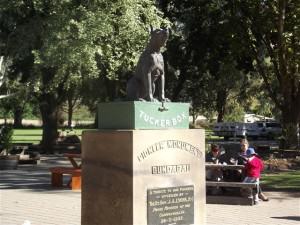 section is cast in bronze but the base was sculpted by Frank Rusconi and the monument was officially unveiled by then Prime Minister Joseph Lyons on November 28, 1932. The last time we visited here the “Dog” had been commercialized and it was so disappointing but they seem to have come to their senses now. Yes, there is a café where you can buy souvenirs but it really is just about our famous dog. As it should be.