The Hawkesbury Highlands, northwest of Sydney along the Bells Line of Road, is an area packed with a diversity of mountain scenery, orchards, cafés and galleries, gardens, and magnificent views, and is the perfect place for a winter weekend. We set off on a day of glorious sunshine, not a 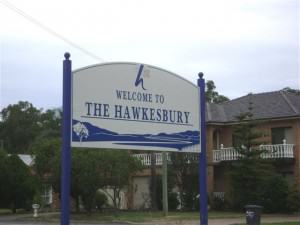 cloud in the sky, the cold, crisp air invigorating; what a sparkling day! And bordering the road all the wattle trees were in full bloom with masses of tiny golden balls. We travelled through the Hawkesbury Valley, gateway to the Greater Blue Mountains World Heritage Area, and the historic town of Richmond before turning onto Bells Line of Road and beginning our climb up through the mountains. The road took us through the townships of Kurmond and Kurrajong before we began the very steep climb up Bellbird Hill, one of the few places where you can hear the delightful sound of bellbirds singing. At the top of Bellbird Hill is the township of Kurrajong Heights and only a kilometre or two outside town is Madison’s Mountain Retreat ([star][star][star][star]), our accommodation for the weekend.

Our accommodation in the Hawkesbury Highlands

Madison’s is set on 36 hectares (83 acres) bordering the Wollemi National Park and consists of 8 self-contained cedar cottages. Somewhat different to our usual choice of accommodation but I was really looking forward to it. We were met at the check-in counter by Jenny, Madison’s “guest relations officer”. Sounds official, doesn’t it? Well, Jenny is an 8-year-old blue heeler who takes her “meet-and-greet” job very seriously. She gave us the once over and wagged her tail in approval. Our cabin overlooked the Alpaca enclosure. They are such beautiful and graceful creatures and I was thrilled to be this close to them. 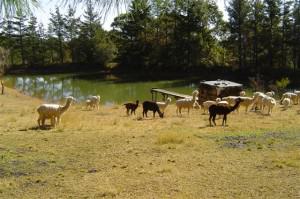 Madison’s herd is a registered breeding herd and they’ve won numerous ribbons at shows, including the Sydney Royal Easter Show 2006. As I said, the cabin was somewhat different to our caravan and streets ahead of the tent but to say it was fantastic is a bit of an understatement! There was a log fire, wood provided, a kitchenette, several comfortable sofas, and in the bedroom the biggest bed I had ever seen!  We’d already decided on a drive up to Lithgow in the afternoon but first we wanted to go for a walk around the property.  What a really great place! Several of the cabins were occupied and they are all basically of the same layout although a few of them have a private spa. Unfortunately, ours didn’t. There is also a gazebo with gas barbecues and tables and chairs for the guests. Had the weather been a little warmer it might have been fun to have a barbecue dinner. The resort boasts an 18-metre (60-foot) indoor solar-heated swimming pool and spa, and a tennis court for use by the guests. We were most impressed by what we’d seen so far and would have liked to walk further on some of the many walking trails around the resort but if we wanted to get to Lithgow and be back for dinner then we had to go.

Bells Line of Road continues past the Fernbrook Garden and Botanical Art Gallery, through the Hawkesbury Highlands town of Bilpin, the capital of apple country, where the “World’s Largest Fruit Bowl”, a roadside attraction, is located. Bilpin was originally known as Bell’s Pin after Archibald Bell who crossed the Blue Mountains in 1823. The town is only a few kilometres from another Highlands town, Mount Tomah, where you can visit the Mount Tomah Botanic Garden. At 1000 metres (3280 feet) above sea level 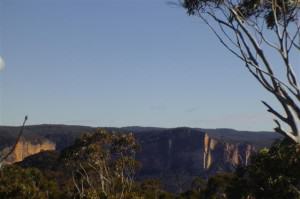 The view from Wall’s Lookout at Pierce’s Pass

it has to be Australia’s coolest garden! There are over 40,000 cold climate plants here, including the famous Wollemi Pines that are over 200 million years old! These pines were born when dinosaurs ruled the earth! We continued on our way through Mt Bell (998 metres or 3274 feet) and Mt Charles (934 metres or 3064 feet) to Pierce’s Pass and stopped briefly at Wall’s Lookout before we arrived at Mt Wilson (1040 metres or 3412 feet). The Windyridge Garden at Mt Wilson is an ideal home for cold climate plants and they thrive in the rich volcanic soil. And a visit to Windyridge is not complete without a cup of coffee at the Mt Wilson Post House Café.

But time was moving on and so were we. Our next stop was at the famous Zig Zag Railway, long recognised as one of the great engineering feats of its time as it crosses 3 magnificent sandstone viaducts and passes through 2 tunnels in its 210-metre (690-foot) descent to the Lithgow Valley below. We thought we might like a ride but the next train wasn’t leaving for over an hour and we simply didn’t have the time this day. Built between 1866 and 1869 the Zig Zag Railway is a series of sloping tracks forming the letter “Z” as it winds its way to the bottom. The popular old steam train departs from Clarence, the 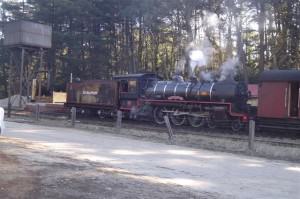 mountains’ highest station at 1115 metres (3658 feet) above sea level for its 45-minute journey to Bottom Points Station at 994 metres (3260 feet), a distance of 121 metres (398 feet) where the locomotive is unhooked and travels around to link up with the other end of the carriages for the trip back. There are some lookouts where the train stops, including the scene of a runaway train crash in 1901 when the brakes failed; the train crashed through the wooden buffer stop and stopped half suspended over the cliff edge. Neither the driver nor fireman were injured and both reported for work the next morning when the train was pulled back onto the track and continued on its way!

A visit to Lithgow

From Clarence it was a short 10-kilometre (6-mile) ride to Lithgow, a city shaped by history from its first commercial coal mine in the 1860’s and the establishment of the iron industry in 1875 to the construction of the Wallerawang Power Station in the 1950’s. Situated on the western slopes of the Blue Mountains the town was named in 1827 but it wasn’t until 1869 when the western railway line was constructed that the town prospered. There are some magnificent old churches in Lithgow including the Hoskins Memorial Church. Built in memory of Guildford Hoskins, it was dedicated in 1928. 10 kilometres (6 miles) south of Lithgow is Hassans Walls Lookout, the highest scenic lookout in the Blue Mountains at 1130 metres (3707 feet) above sea level.  The views of Mt Wilson and the Hartley Valley are outstanding. In the 1830’s several convict stockades were built in the Lithgow area including one at Hassans Walls. Inmates from 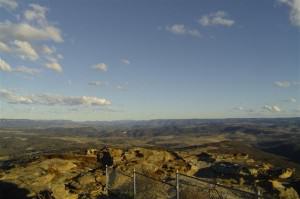 The Hartley Valley from the stockade at Hassans Walls

this and other stockades worked on many of the roads and bridges in the area. These stockade sites are now all bare grassy fields and paddocks today although some artefacts can still be found such as buttons and fragments of tools.

The sun was setting by the time we’d returned to Madison’s and we still had to decide where to go for dinner. There are quite a few restaurants in the area but after much deliberation we settled on The Apple Bar at Bilpin. Well, one could say we were impressed but that really doesn’t come close. Inside the restaurant there is a log fire and the tables are arranged around it making for a cosy atmosphere. For summer dining there are outdoor tables but this night we quite enjoyed the fire. And the food was outstanding! The portions could have been a little smaller but no one could ever complain about not getting value for money.

The next morning we enjoyed a leisurely lie-in before taking our time over breakfast and showers as check-out time is 12:00 but all too soon we were packed up and ready to go. We took a short drive out along the Mountain Lagoon Road and around Berambing before turning homewards and stopped briefly at the top of Bellbird Hill for a photograph of Sydney in the distance. We drove home through Windsor, another town steeped in history. This is the third oldest place of British settlement on the Australia continent. The area, settled in 1791, was originally called Green Hills. In 1813 a report was sent to the Governor of New South Wales, Lachlan Macquarie, concerning a proposed invasion of the Hawkesbury River and Windsor by France. It was planned to target the granary in order to cut off food supplies to Sydney. Well, the invasion never did eventuate and, in fact, no proof of such was ever uncovered but the 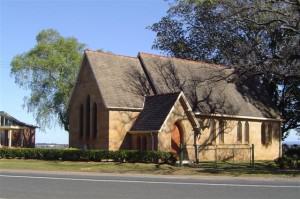 proposal showed just how important this new settlement was. But this day there was a street festival, which meant a few road closures, unbelievable traffic, and crowds. Unable to find a place to park we drove through some of the less crowded streets and finally found a park that was relatively deserted where we could have lunch. I would have been happy to wander around the festival for a while but with a long drive ahead of us we decided to carry on. Perhaps another time we’ll return to Windsor and stay for a few days. This has been a terrific weekend, a rarity for us in that we didn’t take the caravan or tent, and no one so much as mentioned “fishing”, for a change! And we thoroughly recommend Madison’s Mountain Retreat at Kurrajong Heights. The managers, Libby and Tony Attwood, and, of course, Jenny, the Guest Relations Officer, will make you more than welcome. And Madison’s is dog friendly although cats are not permitted; they tend to upset the alpacas. If you’d like more information you can contact them at attwoods@MadisonsRetreat.com.au