Iluka on the far north coast of New South Wales is one of the Northern Rivers region’s best-kept secrets. This little seaside town on the northern side of the mouth of the Clarence River is really laid-back and is surrounded by national park, ocean, beaches, and the river.  The best of a lot of 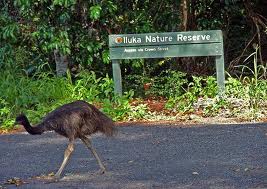 worlds! We decided to stay at the Anchorage Holiday Park ([star][star][star][star_half]) on the northern shore of the Clarence River and only a stone’s throw from Iluka’s ocean beaches and boat harbour. The campsites here are all grassed and spacious and the amenities and facilities are first class. It is also wheelchair and pet friendly and as our little dog, BJ, stretched out on the grass in the sun, as little dogs do, I was sure I heard him sigh with contentment. The Anchorage is bounded by the Bundjalung National Park. The park is named after the Aboriginal tribe that occupied this area and it stretches from Evans Head in the north to Iluka, a distance of approximately 35 kilometres (22 miles). To the south of the national park is the World Heritage listed Iluka Nature Reserve, which contains the largest remnant of littoral rainforest in NSW.

Our first day in Iluka we woke to clear skies and the barest hint of a breeze. There are several beautiful beaches and picnic areas around Iluka, including Shark Bay, Frazers Reef, Iluka Bluff and Back Beach. At the Bluff there is a magnificent lookout and whale-watching platform. The whales come close inshore during their migration and when the word goes out that there are whales to be seen it’s generally barely 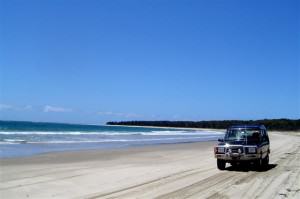 Driving on the beach at Shark Bay

standing room only at this terrific vantage point. At Shark Bay (not to be confused with Shark Bay in Western Australia) there is a 4×4 beach access track and we thought we would drive along the sand towards Black Rocks where there is a camping ground. John wanted to have a look, for future reference, he said with a grin. There were several vehicles on the beach; I think we must have arrived at peak hour! And there were quite a lot of people fishing. I wondered if they were catching anything but didn’t want to broach the subject with John in case he decided to throw in a line himself. We’d already agreed that he would go fishing that afternoon and I was more than happy with that but I certainly didn’t want to spend the whole day at it! We’d also heard about some curious rock formations around the Black Rocks area so we were more than a little disappointed to find that the 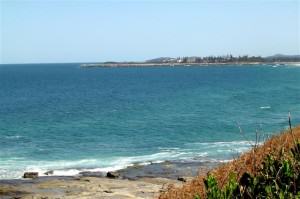 View from the Bluff of Yamba in the distance

access track here was closed because of recent bushfires. We started back the way we had come and were almost to the end when John decided that he’d like to have a swim. There were some dogs running on the sand so we let BJ out of the car for a bit of a romp and it was only later that we learned that the beach is part of the National Park and dogs were definitely not allowed there. John enjoyed his swim but I stayed on the beach and watched, all the while hoping that the name, Shark Bay, didn’t have any significance!

One of the best, if not THE best, surfing beach in Iluka is at Iluka Bluff where the whale-watching platform is located. We drove up to the Bluff from Shark Bay but there were no whales to be seen; it’s the wrong time of year. However the views of the mouth of the Clarence River and the town of Yamba on the other side of the river were quite amazing. Later that afternoon we visited Iluka Beach and walked out along the break-water. There were sailing boats just offshore and it was quite warm in the sun. There was no wind and hardly a ripple in the water; a perfect afternoon. Of course, not so perfect if you’re a surfer looking for a wave! We watched the commercial fishing fleet make its way out to sea and then walked down to a place called Moriarty’s Wall. This stone wall, constructed around 1862, was the first attempt at stabilising the

river entrance. It now forms part of the breakwater so on one side is a beach where the water is shallow and children can play and swim in safety and the other side of the wall is the Clarence River and many people come to fish here. It was late in the day and a few fishermen were just setting up for the turn of the tide, supposedly the best time to catch anything. The beach is also a leash-free area for dogs so while BJ had a run, I walked on the sand, and John threw in a line, with the usual results. Not that that mattered, I think the mere fact that he was fishing was enough. The sun was very low in the sky and a cool breeze had sprung up by the time we returned to our camp that afternoon and we settled down with our glass of Two Tails Sparkling Wine for a quiet evening, listening to the crickets and other nightlife as the sun finally dipped below the horizon and the stars appeared in all their splendour.

It was an early start for us the next morning mostly because BJ needed to go out but as it turned out we were far from disappointed at missing an hour or so of sleep; we were treated to the most glorious sunrise we had ever seen. The rays of the sun lighting up the sky were just . . . well, words can’t describe how beautiful it was. After that start, everything else was going to be second-best.  After breakfast we set off for the little village of Wombah and a visit to the Wombah Coffee Plantation. Established in 1982, it is the southernmost coffee plantation in the world. Tours are by appointment only so we were unable to enter the plantation itself but we did enjoy a cup of Wombah coffee, a very mild blend that is naturally low in caffeine. There are a number of islands in the Clarence River, some large enough to support whole communities. The bridge across from Wombah to Goodwood Island was opened in 1967; before that you had to take the ferry. The sugar cane was being harvested on Goodwood that day and, having never seen an operation like that before, we decided on a quick visit to have a look. The modern cane harvester is an amazing piece of machinery and we were fascinated by how quickly the plants were cut, the leaves and outer skin peeled away and the cane dropped into a bucket ready for processing. It wasn’t so many years ago that men with huge knives waded into the field, cutting the cane by hand and disposing of the odd snake or two along 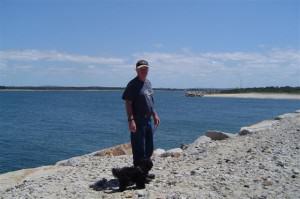 John and BJ on the breakwater

the way. We decided that we wouldn’t mind another walk out on the breakwater before lunch and so drove on back to Iluka but stopped in town for a cup of coffee on the way. This time we went to the Sumth’n Tastee café and it was one of the best cappuccino’s we had ever tasted. If you ever come to Iluka, you really must have a cappuccino at the Sumth’n Tastee, you won’t be disappointed. Then we walked out to the end of the breakwater but it was quite hot in the sun and I’d forgotten the sunscreen so we didn’t stay long. With my fair skin I sometimes feel that I could get sunburned at night!

Jazz on the ferry across the Clarence River

For our last afternoon here we took the ferry across to Yamba. Even BJ was allowed on the ferry and he seemed to enjoy himself with the breeze blowing in his face as he sat by the window. The MV Mirigini departed from Iluka Marina at 2:30 in the afternoon and the trip across the Clarence River took a little over half an hour. The Sunday Jazz Cruise, which includes a light lunch and a tour of the river, departs at 11:45 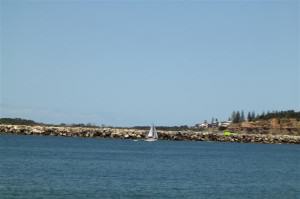 Sailboat on the Clarence River

am and returns at 2:30pm and the jazz duo that performs on that cruise was still aboard when we cruised across the river and they continued to perform for us. They were really good and we thoroughly enjoyed our trip. Most people disembarked at Yamba and there were not too many folks making the trip back to Iluka with us. On our return to Iluka we drove around the marina and down to the boat harbour. There were many fishing boats tied up at the commercial fishing docks. Nestled amongst the larger boats was a small one; it seemed so odd and I wondered what it would like to be when it grew up! Soon the boats would be making their way out for another night’s catch and it was time we returned to camp for the next day we would, reluctantly, bid farewell to Iluka. 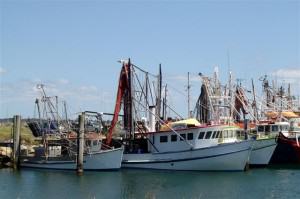 For many a long year Iluka has been famous for its fishing and it is said that when fishermen dream, they dream of Iluka. The serious angler would never visit without a frying pan in his kit! But whether you want to surf, fish, do some bush walking or even bird watching, or perhaps, sit and marvel at the tranquillity, Iluka is well worth a visit, time and time again.