Jackadgery. When John first mentioned it my first response was “you want to go where?”  Northwest of Grafton in northern New South Wales, it is a spot on the map with a name that begs to be explored. Although what we would find there had me groaning. Was this going to be one of those 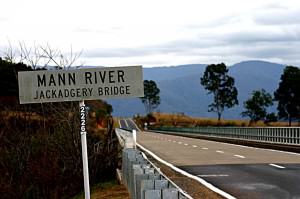 “roughing it” camping trips? You know the kind, at one with nature and no indoor plumbing. Of course John and young son, Sean, thought it was a great idea. So it was with some reluctance on my part that we dusted off the tent and the camping gear, made sure that all was still in good order, and set off to enjoy a quiet couple of days away from all the cares of the world. How was I to know that that little spot on the map would turn out to be such a terrific place? Lush, green pastureland, spectacular hillsides dotted with trees, fat cattle, and lovely old farmhouses, fast-flowing creeks and rivers of sparkling clear water assailed our senses as we travelled through the townships of North Dorrigo, Tyringham, Clouds Creek, Nymboida, where we crossed the magnificent Nymboida River, Coutts Crossing, and finally, South Grafton where we stopped for lunch. A little side trip into Grafton proper proved interesting. We crossed over the Clarence River via the Grafton Bridge and were quite amazed to find a “corner” at each end of the bridge itself. I’m not kidding, and these corners were not smooth bends, they were actual 90° corners! Must have made navigating a 22-wheeler an experience, not to mention a B-Double! It’s not as if it’s a wide bridge!

The caravan park in Jackadgery

It was a little after 2:00 when we left Grafton via the Gwydir Highway and 35 minutes later entered the bustling metropolis (?) of Jackadgery, population 300, and not a house in sight! Well, all my pre-conceived ideas about the campground went out the window. What a fantastic place!! The Mann River Caravan Park ([star][star][star][star]) is on the banks of the Mann River, obviously, there are magnificent trees shading all the sites, 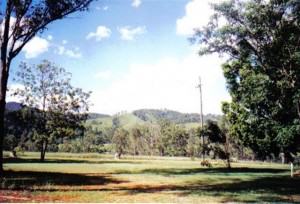 View of the Gibraltar Range National Park from our tent

and the sites are all grassed too. Modern, clean amenities, a store for basic supplies, and a swimming pool as well! Not crowded, and very well laid out, it’s absolutely perfect! After setting up camp in near 40°C (104°F)heat we walked up to the shop for icy poles and checked out the pool on the way back. Then John decided we should walk down the hill to the river so he could see what the fishing was like. The walking down, in that heat, was not the problem; it was the walk (should I say “trudge”?) back up. But finally we dropped our exhausted bodies into chairs at camp, drank a couple of gallons of soda water with lemon juice in it, and watched several late arrivals, loaded down with canoes, setting up their camp. The scene from the front of our tent was just brilliant and I hoped that no one would set up their camp right there and block our view. This is a wonderful park surrounded by the most beautiful scenery and to think I almost vetoed coming here. I’d pictured a treeless, grassless, rocky and dirty park, with disgusting outdoor toilets that didn’t flush and cold water showers, at best, on the banks of a river with little or no water in it, and what there was, dirty and stagnant! Talk about a misconception!

Copmanhurst on the Clarence River

Typical as these tourist parks go, the noise of people chatting and packing up campsites started about 5:30 the next morning. We’d almost forgotten what it was like but the memories soon came flooding back. We awoke to a cloudy morning, a little cooler than yesterday, with intermittent light rain. Over breakfast we decided on where we’d like to go and what we’d like to see. The nearest (the only) town, Copmanhurst, looked interesting so off we went. We followed the unsealed, rough road for some distance until we came to a fork and a road sign. We took the right fork and, wouldn’t you know it, ended up right back on the highway! So, back to the caravan park where John asked for directions (we should have done this before we left!) and the folks at the shop were more than happy to tell us where to go! We drove back along the 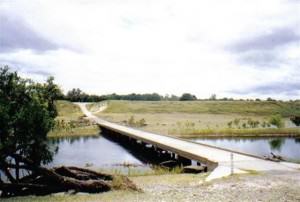 Lilydale Bridge over the Clarence River

way we had gone before and when we reached the fork we turned left towards Lilydale. Lovely green pastures spread out on either side of the road and in most places it was unfenced, making us wary of any cattle we saw. It wasn’t long before we came to a charming little bridge, more like a causeway than a bridge. The Lilydale Bridge crosses the Clarence River and the water was so clear we could actually see the fish swimming. Copmanhurst (population approx. 400) is a lovely little village beside the Clarence River. In the early days large boats plied the river bringing much needed supplies and mail to mining and rural workers. The rapids that mark the navigation limit for boats are here so Copmanhurst was generally accepted as the last port of call and it is the highest navigable place on the river. The population of the village would swell whenever a boat was due as people 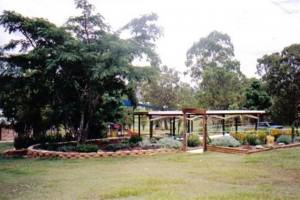 from outlying properties came into town to collect supplies and mail. The village was bigger than we expected and we drove around to the Federation Park. The park has a well laid out and quite beautiful garden called The Sensory Gardens, which, as the name implies, is designed to stimulate the senses. Well, it certainly did that.

Fishing in the Mann River

We returned to camp for lunch and afterwards went for a swim in the pool. By now the clouds had mostly cleared and it was hot. One of the main reasons that John wanted to come here was that he’d heard there was great fishing in the Mann River and the people in the office had told us that just the week before someone had caught a huge Murray Cod that was supposedly a record size. So after our swim he and Sean went off to dig for worms for bait. With their worms in hand they set off later in the afternoon to spend a couple of hours on the riverbank trying to catch that elusive fish dinner they keep promising me. Needless to say, we availed ourselves of the take-out shop in the park that night.

The sun was already burning off the cloud when we got up the next morning and it heralded another day of hot temperatures. Caravan parks are a world apart; you either love them or you hate them but however you feel about them, they’re never boring. This morning at the showers a couple of older ladies were having a lively conversation and although I never pay attention to the things said in these situations there was one thing that piqued my curiosity. One of the ladies, whose name was Dot, complained about the timetables. 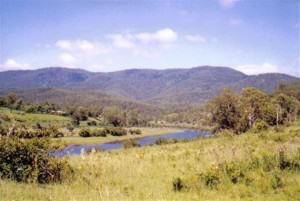 The Mann River at Hanging Rock

Timetables? In a caravan park? But it seems that her husband, who has recently retired, worked in an industry where everything was on a timetable and now, with a lot of free time on his hands, he’s continued this regimen in their home life, their marriage, and even their sex life. I chuckled to myself as she went on to explain, in intimate detail, the timetable of their sex life, with her friend hanging on every word! Like I said, a world apart.

A visit to Hanging Rock on the Mann River

Our exploring this morning took us over 100 kilometres (60 miles). We started by driving out to Cangai and crossed over the Mann River and then onto Hanging Rock and Wave Hill through some of the most beautiful rolling hills and meadows that we’d ever seen.  We crossed the Clarence River at Coombadjha and were now travelling through unfenced properties with horses and cattle grazing close to the road. Hanging Rock, Wave Hill, and Coombadjha are not so much towns as properties with the road running through them. Hence the lack of fences and the abundance of stock close to the road. We meandered around the hills and valleys for a couple of hours just marvelling at the amazing scenery; we hardly saw another car in that whole time. Finally we came to the main road, the Clarence Way, at the village of Fineflower. From here on it was, for the most part, a sealed road and we picked up a bit of speed. In only 10 minutes we’d reached the turn-off to Jackadgery. Across the Lilydale Bridge, down Purgatory Creek Road, and we were once again on the Gwydir Highway and heading for camp. 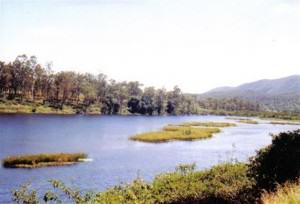 The Clarence River at Coombadjha

Fishing in the Mann River, Take 2!

By now it was lunchtime and very hot so after a quick bite to eat John and Sean went for a swim. It was way too hot for me; I stayed in the shade but later that afternoon we went down to the Mann River to try our luck once more with a fishing rod. There was no breeze but the water was sparkling in the sunshine and looked very inviting. Quite a few people were swimming and others were fishing; there were even some canoes. But, sadly, there were no fish; in fact, there wasn’t even a nibble! We’d heard all the stories about huge cod that people catch here but today, nada! We returned to camp empty-handed again and settled down for a quiet evening, enjoying the breeze that had sprung up. There were a few stars overhead and, in the distance, the lightning flashes of an approaching storm. The gentle sound of cattle mooing floated on the breeze and it wasn’t long before we were all starting to nod off.  Jackadgery, what you see is what you get but we weren’t disappointed. Not even a little bit. Well, maybe the fish could have been biting! After my initial reluctance to come here, I was sorry that we were leaving the next morning. It’s not a resort, as resorts go. Some people might even think it was a last resort (pun intended). But for a few days of peace and quiet and relaxation you really can’t go past it.

View all posts by Austracks →
Iluka
Jindabyne and the Snowy Mountains