Roma, Capital of the Western Downs, as the publicity goes, is the centre of Queensland’s oil and gas exploration. It is also the service centre for much of western Queensland and although it is a modern country town it does boast some impressive heritage buildings, includ­ing the Roma

The original court house was the scene, in 1873, of the trial of the infamous bushranger Captain Starlight.

A nice caravan park in Roma

We arrived in this colourful frontier town in Queensland’s southwest shortly before lunchtime on a sunny autumn day and rolled up to the front gate of the Villa Tourist Park ([star][star][star][star_half]).  It’s roomy and well laid out with lots of grass and open spaces, and nice ameni­ties. We set about  getting the camp organised before heading into town for some shopping and a bite to eat. The manager at the tourist park had recommended a café called Rogues of Roma and so we stopped in there for some lunch before hitting the shops for some serious souvenir hunting. 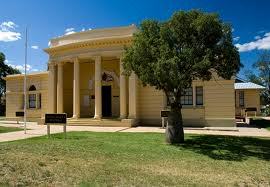 We wandered down towards the river and in Heroes Avenue we found the Largest Bottle Tree. The bottle trees were planted to comme-morate local soldiers who had died in World War I and this particular one had been transplanted to this location in the 1920’s. Its girth is 8.9 metres (approximately 30 feet). As John said, that’s a lot of firewood!

Right next door to a winery!

The Romavilla Winery, Queensland’s oldest winery, established in 1863, is right next door to the tourist park and later that afternoon we decided to go and have a look. I suppose I was expecting one of those upmarket wineries so I was a little disappointed

when we first arrived. In spite of the fact that Romavilla Wines have won awards from all over the world, I thought that their presentation left a little to be desired – that was until I got inside. The  building itself looked to be in need of a little work but inside there was a small reception and tasting area, and the rest was obviously a working winery. The marketing strategy of wineries in the Hunter or Barossa Valley’s wasn’t in evidence here but I imagine they thought the wines would speak for themselves. And speak they did! In fact, they shouted! It wasn’t hard to see how they could have won so many international and domestic awards and we were glad that our camp was right next door because after tasting so many of these fine wines there was no way we could have driven anywhere!

We stayed for about an hour and when we finally left there were a few bottles of red and a bottle of port tucked under our arms, and a promise to return some day. Our campsite was situated at the back of the grounds, close to the camp kitchen and this evening we met a couple of guys, Telstra linesmen/technicians, who were working on lines throughout Outback Queensland. They told us many stories about their time in the outback, the places they’d stayed and worked in, snakes and other assorted unwelcome guests they’d had the misfortune to come across in their travels, and the condition of some of the roads. The information was duly filed away for future reference and, no doubt, will prove to be invaluable on our next and subsequent trips.

That night there was a party across the road from the tourist park. It was a very loud party that went on long into the night, and there was one screeching voice that could probably have blistered concrete. It made

Entrance to the Big Rig

getting to sleep a challenge but the party animals gave up their noise in the wee small hours and we finally got to sleep. So it was a late start the next day and almost midday when we set off to see the Big Rig and to do the tour. Oil was discovered here at a place called Hospital Hill in 1900 and the Big Rig is a living memorial to Australia’s oil and gas industry.

It was not something that I’d particularly wanted to see but, as John said, when in Roma . . .  (sic). As it turned out the whole thing was fascinating, learning about the oil and gas exploration, seeing actual machinery that was used, and using the interactive displays. Who would have thought that drilling for oil and gas could be such a complicated process; they make it look so easy in the movies! It was definitely a couple of hours and a few dollars well spent. 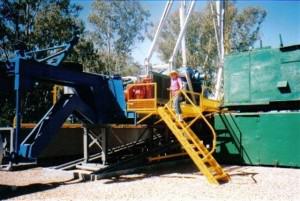 There are several displays of trucks and equipment scattered around the grounds and we wandered around for a couple of hours, inspecting the drilling platforms and trucks. We walked around them, through them, and, in some cases, over them.  I, particularly, found the history of the oil and gas industry interesting.  Five wells were drilled on Hospital Hill in the years between 1906 and 1929, with the express purpose of finding oil and so much oil and gas was found that a plant to manufacture motor fuel was built between 1929 and 1931. Several of these original wells have now been utilised as town water bores.

After leaving the Big Rig we went on into town to do a little more souvenir shopping and that’s when our after­noon became more interesting than we’d expected. We parked the car in the parking lot at the 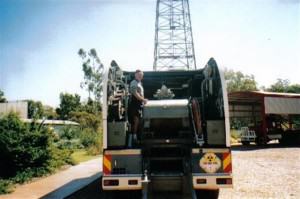 supermarket and wandered into the shops. We weren’t there long and it was on our return that things livened up. John reversed the car from the parking spot and as we went to drive off something on the ground caught his eye. It was about 1.5m (5 feet) long, thin, and caramel-coloured. Yes, a snake. And not a very happy one at that.

The parking lot was full of cars and people, there was a crowd of people over near the shops, and the snake was definitely heading in their general direction. This could get interesting. Country folks tend to take things like this in their stride and no one seemed too bothered by it all but we were curious as to what type of snake it was. Just because it was brown didn’t necessarily mean it was one of the deadly “Brown Snake” family and for those of you who don’t know, the “Brown Snake” is the second deadliest snake in Australia. It is also very aggressive, nasty, and decidedly un­friendly, and those are its good points! They can “jump”, too. Apparently the brown snake can coil itself up so tightly that it springs forward, giving the impression of a “jump”. Terrific! Somebody said it was a Mulga Snake; I’d never heard of a Mulga and neither had John but by now said snake was starting to get really irritated, raising its head in what we took to be an attack mode, and, we think, generally getting ready to strike at anything. Everyone was giving it a wide berth and we decided it was time to beat a hasty retreat.

How to really tick off a snake without really trying!

Then some bright spark thought he’d run over it but missed its body and ran over the tail. Well, that snake was now totally ticked off and it shot up under the nearest car, wrapped itself around the axle and there it stayed. No one was going to try and get it out; when those things get mad, they stay mad! It wasn’t too long before a National Parks and Wildlife snake handler arrived and so we left to continue our shopping. We

learned later, via the internet, that the Mulga is actually a King Brown, the nastiest of the “Brown Snake” family. I imagine the snake handler probably relocated the horrible thing to somewhere free of people. Snake handler? Now that’s a job I wouldn’t have for all the money in the world!

While driving around town we discovered Roma’s famous Duck Pond. This is a favourite picnic spot in Roma; an artificial pond developed as part of the flood manage­ment plan. It has attracted a lot of domestic ducks and semi-domestic local waterfowl since its completion. At the time of our visit the water in the pond was a muddy brown colour because of recent heavy rains and, unfortunately, there wasn’t a bird in sight when we arrived.

There’s much more to Roma than oil and gas (or snakes and ducks for that matter). For instance, St Paul’s Anglican Church is constructed of concrete blocks made on-site during the Great War and some of 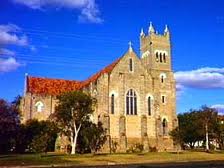 the stained glass windows date back to 1875. Roma’s history dates back to 1846 when Sir Thomas Mitchell and his party travelled up the Balonne River to an area he initially named Fitzroy Downs and in 1847 Ludwig Leichhardt, arguably Australia’s best known explorer travelled west from there to the present site of Roma.

A Fountain of Youth

To the west of Roma is the town of Mitchell. At 87 kilometres (54 miles) it’s close enough for a day trip and we decided we’d pay a visit to this charming little town. There are many towns in Queensland that claim to be the Gateway to the Outback but only Mitchell can lay claim to its very own Fountain of Youth. Mitchell’s most famous attraction is the Great Artesian Spa and no visit here is complete without sampling the restorative properties of this warm, mineralised, artesian water. We took the plunge, literally, and it proved to be one of the most relaxing and invigorating hours of our whole trip. The water comes from the Great Artesian Basin, underlying approximately one fifth of Australia. The bore brings water to the surface from more than a kilometre (.6 of a mile) underground and some of this water is believed to be about 2 million years old. 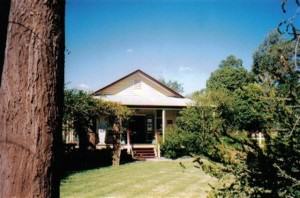 A courthouse with an oil well!

We visited the Kenniff Court House after lunch and learned a little of the local history, particularly the story of the Kenniff brothers, the last of Queensland’s bush­rangers. I found the whole court house fascinating; there aren’t too many court houses in the world with an oil derrick in the front garden! We returned to Roma late in the day and started packing up the camp. Our few days here had been far too short but it was time to move on.  Roma is conveniently located at the intersection of the Warrego and Carnarvon Highways and is a perfect base for exploring the region. The Carnarvon Highway is known as the Great Inland Way and stretches over 2000 kilometres (1243 miles) from Dubbo in the New South Wales central west to Cairns in Queensland’s far north.