Scotts Head on the New South Wales mid-north coast is the star on the Nambucca Valley’s Christmas tree! We’d planned a short break in this idyllic seaside town and in the week leading up to leaving the weather was stunning. Sunny skies, temperatures hovering in the low 20’s, and no wind had us looking forward to the break with great expectation. So you 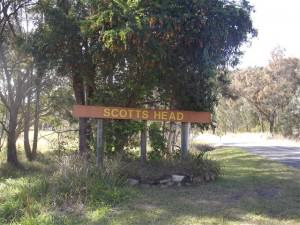 can imagine our disappointment when we awoke to grey skies,

strong winds, and a few showers on the day we were to leave. Undeterred? You bet!

Going north along the Pacific Highway, the travelling was easy with little or no traffic, and, factoring in stops for lunch and a flat tyre on the van, we arrived at the Scotts Head Holiday Park ([star][star][star][star_half]) some 5 hours after leaving home. This is a really nice park. It’s well laid out with sealed roads and roomy sites. And, it’s dog-friendly. The weather wasn’t being co-operative at all with strong gusts of wind and 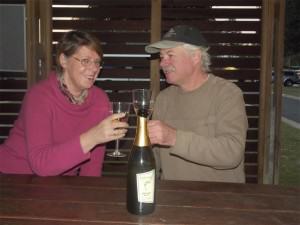 showers, not to mention the cold, but we got the camp set up pretty quickly and took our bottle of Two Tails Sparkling Wine across to the camp kitchen to celebrate our first night in a new park. But it was far too cold to stay outside and so we retired to the welcoming warmth of the van. We’d only been inside a few minutes when there was a knock at the door. The manager of the park advised us to move our car from under the trees – just in case. And that was the start of a wild, wild night. High winds buffeted the van and heavy rain fell. At about 2:00 in the morning I started to think that maybe we should just go home and try Scotts Head another time.

A near-perfect morning in Scotts Head

The morning, surprisingly, dawned bright and sunny, if still very windy. After such an awful night, who would have thought . . .  John took our little dog, BJ, down to the beach where dogs can have a bit of a run and he was so impressed by the beach (John, not BJ) that he insisted that I see it.  Well, I was impressed. It is absolutely beautiful and very sheltered from the wind. Perfect for a spot of fishing, John remarked. But first 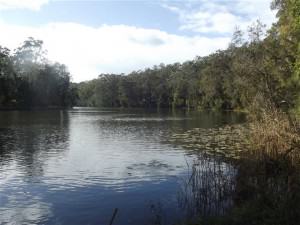 Warrell Creek from under the highway bridge

we wanted to explore Scotts Head. This is a town of outstandingly spectacular views and extremely beautiful countryside. We drove around the town and out along the road to where the highway crosses Warrell Creek. The creek meanders lazily through the landscape and with the sun reflecting off the water’s surface, it was especially beautiful. The highway crossing seems to be the only place where you can actually access the creek and probably the only place where one can fish in the creek. Not that John wanted to fish in the creek, his sights were firmly set on that beach!

After our drive we stopped for coffee at, what I suspect is, Scotts Head’s only coffee shop, the Café Cruz, and what a nice cup of coffee it was, too. After that we drove around to Scotts Head Reserve, to the headland just past the Surf Club, where there is a lookout platform. But first I wanted to watch the surfers. Don’t these people feel the cold? I was shivering 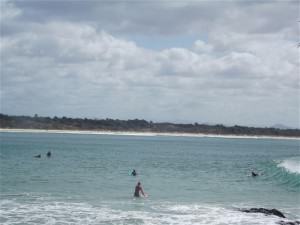 Surfers waiting for a wave

just watching them! As John, a surfer in his youth, informed me, the waves, although few and far between, were good and some of these guys managed to ride them right in almost to the beach. It’s a sport I never really could get my head around. Great to watch but balance on one of those little planks? I don’t think so!

We climbed the stairs to the lookout (a very brief climb although our lazy dog would have told you differently) and sat there for a while being thoroughly entertained by the antics of a Mama whale and her calf. We could see them jumping out of the water and they looked to be having a great time but they were too far away for any decent photographs, even with a telephoto lens. We stayed watching them for quite some time. At this time of the year the whales are starting to come back down the coast and these magnificent mammals are frequent visitors to Scotts Head. 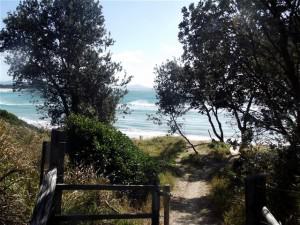 The path down to the “fishing spot”

Later that afternoon the weather had turned nasty again and in spite of it John went down to the beach to fish. To say he had his usual results is grossly unfair, given the conditions; the wind was howling and the seas were rough and dangerous. Still, he persisted and managed to hook a shovel-nosed ray that was returned to the water in, well, if not excellent condition given the hook in his mouth, at least pretty darn good considering how he could have ended up! I’ve been told that they are good to eat but I think they’re too beautiful for that. It wasn’t long after that that John packed it in for the day. It was just too cold and windy and the weather had really closed in again as a few showers started to fall.

The Pub With No Beer

Sunday again dawned sunny but the ever-present wind was getting tiresome. We’d planned on a visit out to the little village of Taylors Arm, some 43 kilometres (27 miles) away. Now, Taylors Arm (pop. 250) is not a vast metropolis, in fact it couldn’t be called a metropolis of any kind. But it has charm by the bucketload and just happens to be the site of Australia’s iconic Pub With No Beer, made famous by Aussie country 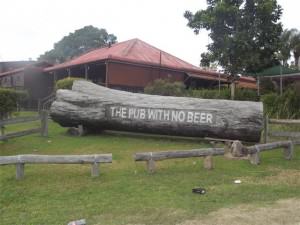 The iconic Pub With No Beer

music legend, Slim Dusty, in his 1957 song of the same name. There’s not a man, woman, or child in Australia who doesn’t know the song but only a handful of them can ever claim to have actually been to the Pub. The road out to Taylors Arm was closed for repairs following a landslide and so we had to take the “scenic route”, a detour of over 20 kilometres along mostly unsealed roads that were winding and narrow. Still, it was worth it. A few drops of rain fell as we alighted out front but we were undeterred. Known to the locals as the 8th Wonder of the World, the Pub is over 100 years old and, yes, it did once run out of beer! After a period of heavy rain and flooding, when all the bridges were washed out, the trucks carrying supplies couldn’t get through! They didn’t have helicopter drops back then!

A visit to the Beer Chapel

At the back of the Pub is the Beer Chapel where the walls are covered in empty beer cans from all over the world. I don’t know if there is every known kind of beer represented but it wouldn’t surprise me if there was! 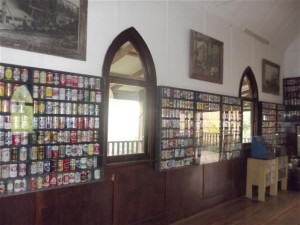 Inside the Beer Chapel

I wondered who had had the job of emptying the cans and just how long it took him to sober up! The Chapel is actually the old Talarm church, built in 1921 and relocated to this site in 2001. We wandered around looking at the memorabilia that covers the walls of the Pub and struck up a conversation with one of the fellows who works there but it was way too early for us to sample some of the beer there (yes, the Pub does have beer, now). That’s not to say that there weren’t folks enjoying some of the amber liquid out on the Pub verandah, just that it was too early for us. We left Taylors Arm and the Pub after a little over an hour with Slim Dusty’s song in our heads and a promise to return some day and were back at our campsite by lunch time. It was time to pack up and head for home after what had truly been, in spite of the weather, a good weekend. Scotts Head is a comfortable drive north of Sydney and is the perfect place for a quiet getaway. With kilometres of sheltered beaches and a relaxed lifestyle, who could ask for more? The folks at the Scotts Head Holiday Park are friendly and helpful, they were happy to organise a late check-out for us, and they are sure to make you welcome when you visit.