Wooli is a charming little seaside village on the New South Wales north coast, surrounded by the Yuraygir National Park and situated on a narrow peninsular between the Wooli Wooli River and the Pacific Ocean. 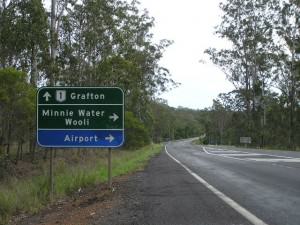 We thought it would be a perfect place for a quiet few days and so we loaded up the van, packed our little dog into the back of the car,

and set off one Friday afternoon. We’d already decided not to travel the 400-odd kilo­metres (approximately 250 miles) to Wooli that night but to stop at a roadside rest area for the night and so after a quick dinner in Kempsey, we headed for the rest area known as Paddy’s Rest. It was dark when we arrived and we were the only vehicle there. Not that that was a problem; there’s no street light in the rest area but it is right beside the highway. However it wasn’t long before a few more travellers arrived and by the time we settled down for the night there were some 6 or 8 other vehicles in the rest stop. I felt a little better at that, safety in numbers, as they say.

We were up early the next morning, raring to go, if not exactly feeling refreshed. With all the noise from trucks along the highway during the night, I’d found it hard to sleep and the arrival at about 1:00 of a B-Double that parked not far from us didn’t help. And so, after breakfast we were back on the road, arriving in Wooli just after 9:30. Wooli is the gateway to the Solitary Islands Marine Park and, not surprisingly, we chose to stay at the Solitary Islands Marine Park Resort ([star][star][star][star][star_half]) where our dog, BJ, was more than 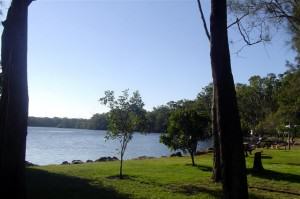 welcome. And that wasn’t the only reason we were more than impressed with our campsite and all it had to offer. From a 5-star camp kitchen to amenities to die for, and right on the banks of the river, we couldn’t have asked for a more perfect spot. The great weather made the whole thing just magic!

The Solitary Islands Marine Park is the first marine park established in New South Wales and stretches from the Sandon River, just south of Brooms Head, to Coffs Harbour, a distance of some 75 kilometres (47 miles) and covers an area of 71,000 hectares (274 square miles). The park is a sanctuary and habitat for many 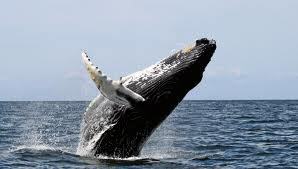 endangered species such as the grey nurse shark, as well as dolphins and migrating whales. The mix of warm currents from the north and cool currents from the south provides a perfect climate, so to speak, for corals and reef fish. Wooli is the site of one of Australia’s most unique sporting events, the Australian National Goanna Pulling Championships. Not nearly as ghastly as it sounds, two combatants have a thick leather belt strapped to their heads and in a test of strength each one tries to pull his opponent across the line to achieve victory. It’s a twisted variation of a tug-o-war and it’s not just for the men; many a strong lady has vied for the $500 prize money!

A few kilometres north of Wooli lies the little seaside village of Minnie Water and the folks in the resort office advised us not to miss the Minnie Lagoon. A beautiful spot for swimming and picnics, it also has very accessible boat launching facilities. So we loaded BJ and a picnic lunch into the car and off we went. 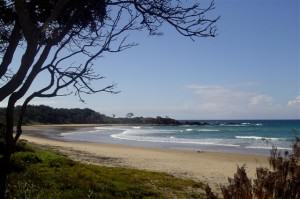 The beach at Minnie Water

We drove past Lake Hiawatha catch­ment area and Diggers Camp Road, the turnoff to Wilson’s Headland, and soon arrived in Minnie Water. Well, Minnie Lagoon is a very beautiful place with quiet and secluded beaches and inviting parklands but we were to discover that, as it is part of the national park, BJ wasn’t allowed on this beach. But a little exploring was in order and we backtracked to Diggers Camp Road and turned off the bitumen and onto a reasonably well maintained dirt road for the 4 kilometres (2½ miles) to Wilson’s Headland. There’s a picnic area slightly south of the Diggers Camp Village. We stopped here for lunch and relaxed in the peace and quiet while taking in the view before making our way back to our camp and meeting up with some interesting natives along the way. 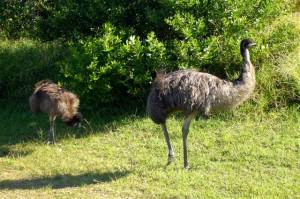 It wasn’t long the next day before John started making “fishing” noises and so, after checking that BJ was allowed on the beach at Wooli, we set off for the headland. John made his way out along the break­water and BJ and I went for a walk on the sand. A couple of fellow anglers, locals, told John about some nice deep holes along the breakwater where the fish like to  go and it wasn’t long before he was literally hauling them in. Most of them were too small and were thrown back but one or two nice little Tailor found their way into his bucket. The breakwater is quite popular with residents and tourists alike and there are a few places amongst the rocks where it is quite safe to stand but one does have to keep a wary eye on the weather; freak waves have been known to wash right over the wall taking the odd unsuspecting fisherman with them.

A leash-free beach in Wooli

BJ and I walked the length of the beach and back with BJ staying as far from the water’s edge as his lead would allow; I’ve never known a dog as afraid of the surf as this one! There were a few diehard surfers in the water but the beach was all but deserted; well, it was May after all and I imagine the whole area would be pretty crowded in the warmer months. Still, I enjoyed the walk and by the time we arrived back at the breakwater, the sun was starting to disappear behind a hill and a cool breeze had sprung up. Once the sun had started its downward journey it seemed to get dark very quickly. John was packing up and darkness had fallen by the time we left the beach and fishing behind. 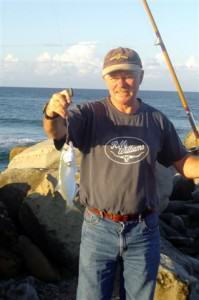 The first of many!

Wooli, good for body and soul

Our couple of days here were at an end and the next morning we were leaving for home. But before we left we wandered around the grounds at the resort. With the river right here, the swimming pool, mini-golf, and many other activities available for guests, you could come to Wooli and never leave the Solitary Islands Marine Park Resort once during your stay! But then you would miss the unspoiled beauty of the Yuraygir National Park, the uncrowded peace of Minnie Water, and the out­standing view from Wilsons Headland. Wooli’s magical appeal stems from its secluded location. With a population of only 580, it’s so quiet and laid-back here that you can’t help but relax. It’s good for body and soul. A visit to Wooli, whether it is for a day, a week, or whatever, might be just what the doctor ordered.