Isn’t it strange how a spur-of-the-moment decision can change everything. Rainbow Beach was not in the plan at all. We had intended to stay somewhere else but that fell through and then a signpost on the side of the road changed our whole trip. It might be off the main highway but 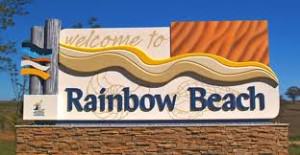 in the centre of town and set about exploring this marvellous seaside town known as the Gateway to Fraser Island, the largest sand island in the world located just off the Queensland coast.

The town sits at the northern end of the Great Sandy National Park and the beach, the last surfing beach before the Great Barrier Reef, stretches for 30 kilometres (18½ miles) from Double Island Point in the south to Inskip Point in the north. On the Esplanade overlooking the beach is the propeller from a large cargo ship, The “Cherry Venture” that ran aground in 1973. The 1451 tonne (1600 ton) empty cargo vessel floundered in heavy seas with swells estimated to be up to 12 metres (40 feet) high, and wind gusts up to 120 kilometres (75 miles) per hour. The ship’s anchor cable parted and the Cherry Venture was unwillingly beached.

In the afternoon of our arrival we took a little drive out to Inskip Point so that John could do some fishing and drove down onto the beach but the breeze, light as it was, was still quite cool. The fishing proved to be interesting; there were lots of bites and he did reel in one or two but they were so tiny as to be hardly worth a mention. The barges for Fraser Island leave from Inskip Point and, unfortunately, time didn’t permit us to visit the island on this trip but it definitely is high on our list for a return visit. 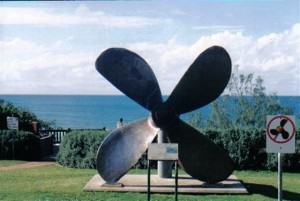 Propeller from the Cherry Venture

The next day we did some exploring starting with a drive down onto the beach. We’d been warned about the rocks on the beach and about the tides. You can only drive on the beach at low tide. When the tide comes in it completely covers all the rocks and many a car has been wrecked and had to be towed out after not heeding the tide warnings. The office at the caravan park has a wall of pictures of battered, wrecked, and drowned cars, one even complete with caravan! But down on the beach we drove all the way around to the headland looking at the cliffs of the spectacular coloured sands. The legend of the coloured sands is well known in these parts:

“Way back in the dream-time lived on the banks of the Noosa River a beautiful aboriginal maiden named Murrawar, who fell in love with the Rainbow who came to visit her every evening in the sky. 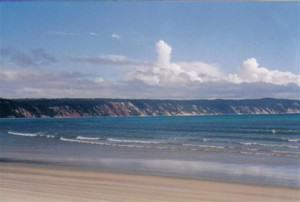 She would clap her hands and sing to this lovely rainbow. One day Burwilla, a bad man from a distant tribe, stole Murrawar for his slave wife, often beating her cruelly and making her do all his work while he sat in the shade admiring his terrible killing boomerang. This boomerang was bigger than the biggest tree and full of evil spirits. One day Murrawar ran away and as she hurried along near the beach, which was then all flat, she looked back and saw Burwilla’s boomerang coming to kill her. Calling out for help she fell to the ground too frightened to run. Suddenly she heard a loud noise in the sky and saw her faithful Rainbow racing towards her across the sea. The wicked Boomerang attacked the brave Rainbow and they met with a roar like thunder, killing the Boomerang instantly and shattering the Rainbow into many small pieces. Alas, the poor sick and shattered Rainbow lay on the beach to die, and is still there with all its colours forming the hills along the beach.” (reprinted from Noosa Tourist Guide, 2003) 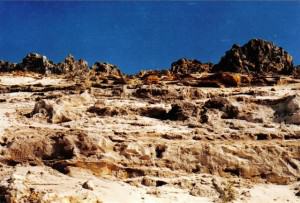 outcroppings and the colours are forever changing, the sands themselves forever shifting with wind and the forces of erosion. Some of these hills are 200 metres (approximately 650 feet) high with as many as 72 different colours produced by combinations of iron oxide and colouring from the vegetation.

The tide was turning

We drove along the beach to Double Island Point and could go no further, we’d literally reached the end of the beach and so, keeping a wary eye on the time, we retraced our tracks. There were a lot of vehicles on the beach, some a little more reckless than most, and the odd one or two heading out to the point. The tide was just beginning to turn and so we made our way back to camp for a quiet evening. Not that it was THAT quiet; the surf club next door to the holiday park had live music and entertainment until the wee small hours of the morning.

After a less than restful night we explored the odd off-road track in the area and found one that took us down to Teewah Beach where the remains of the Cherry Venture can be found. I wanted to see this boat and so we bounced our way along what can only be described as a fire trail and finally exited onto the beach. What a fascinating sight! There she sat in all her glory, after 30 years. Over the years vandals and graffiti artists had had their go at the wreck and she’d been spray-painted with various slogans. Of course 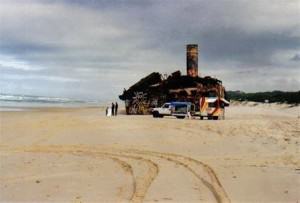 The Cherry Venture with hotdog stand

she was roped off and entry was strictly forbidden because it was considered too dangerous but that didn’t stop some of the more foolhardy ones from climbing up on her. The Cherry Venture was still a majestic sight and not the years, the weather, or the vandals could take that away from her.

Sadly, the Cherry Venture is no more. In 2006 it was decided that the wreck would be demolished because of the dangers it posed, including exposed asbestos in the engine room. In early 2007 she was broken up and removed some 34 years after coming to rest there. But on the day we were there some enterprising fellow had actually set up his hotdog and souvenir stand beside the remains of this once mighty vessel. How could we come here and not partake of a hotdog? It was while we were eating lunch that the army arrived complete with their “ducks”, which are six-wheeled amphibious trucks. They were having some sort of training exercises and we watched for a while but it was all a bit too gung ho for me so we made our way back along the track and back to camp. Of course, we could have gone on the road but, as John said, where’s the fun in that?

There are many things to see and do in Rainbow Beach from bushwalking where you can step straight into the national park and trek through ancient palm groves and dense rainforest, to the Carlo Sand Blow, 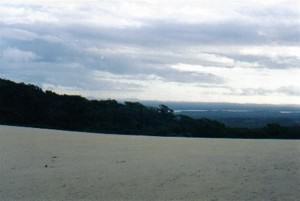 and a number of freshwater lakes but to me no holiday in Rainbow Beach would be complete without a visit to the lookout. We drove up the hill and parked in a small parking area. There was a path that was, supposedly, a slight upward incline for 900 metres (2953 feet) to the lookout. Well, if this was their idea of “slight” I would have hated to see a steep one!! Then again, I’m not exactly marathon material, either! There were all sorts of ferns and native bushes and trees along the path and it was all quite rain-forest-y and really pleasant. And the view from the top made that climb worthwhile. It just took your breath away and I felt like we could see to the other side of the world.

We were standing on a wooden platform but it was obvious by the many footprints in the sand that most people were happy to climb higher for an even better view. Me, I was more than content to stay right where I was! The sand was soft, the kind of sand that made walking a chore. We couldn’t see any people so they must have gone over the dune to the other side. The sun was beginning to set and clouds were rolling in and it started to sprinkle rain as we walked back to the car. The dampness added to my mood because I knew we were leaving Rainbow Beach in the morning and that we may never come back. But those spectacular coloured sands will live in our memories forever and we most certainly will never forget it.