Threeways Roadhouse is at the junction of the Stuart and Barkly Highways in the Northern Territory. From there you can head south towards Alice Springs, north to Katherine and Darwin, or east to the Queensland border. Hence the name ‘Threeways’. We were heading for Queensland and Threeways was to be our overnight for our last night in the 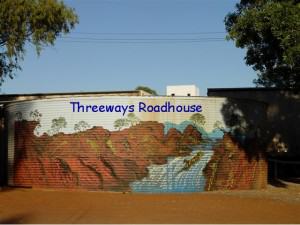 Territory. On our southward journey down the Stuart Highway we stopped at the village of Dunmarra for coffee. This is not much more than a roadside stop along the highway and got its name from a man named Dan O’Mara who went missing in these parts many years ago. His body was never found and the local Aboriginal people who helped in the search couldn’t pronounce his name. They called him ‘Dunmarra’.

Renner Springs, an oasis in the Outback

Our coffee stop over, we continued on our way towards the town of Elliot. A shady, outback town, Elliott was a staging point for convoys during the Second World War.  We didn’t stop in Elliot but continued on to Renner Springs.  This is more than just a roadside stop. With accommodation, hotel facilities, 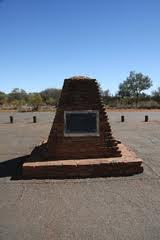 restaurant, and fuel, it’s an oasis. During the building of the Australian Overland Telegraph Line in 1872, Doctor Frederick Renner, the medical attendant for the team working on the line, noticed a large gathering of birdlife and discovered the springs that now bear his name. 11 kilometres (7 miles) south of Renner Springs you will find Attack Creek and a monument marking the place where explorer John McDouall Stuart encountered hostile Aborigines on his first attempt to cross Australia.

The trucks are BIG in the Northern Territory!

We arrived at Threeways early in the afternoon and checked in to the Threeways Roadhouse Tourist Park ([star][star][star]). We set up camp and then set off to do some exploring. There were a few road trains parked at the Road-house and when you see them close up, you understand why they are called “trains”. The trucks here in the Northern Territory come in four sizes, small, big, bigger, and OMG (that’s oh my God!), depending on the number of trailers they are towing, and with a general 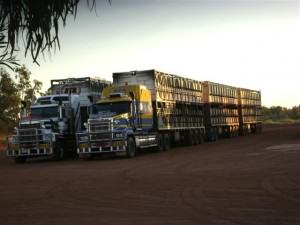 They’re called “trains” for a reason!

highway speed limit of 130kph (80mph) it’s best to stay out of their way! If one of those OMG ones passes you at that speed I think it would create a pressure wave that would just about blow you off the highway! And if you happen to come up behind a slow one (rare but it has been known to happen – once in 1965, I believe), well, you had better hope that there’s about 10 kilometres (6 miles) of straight road ahead because I reckon that’s what it will take to get past!

Approximately 20 kilometres (12 miles) from Threeways Roadhouse is the Devil’s Pebbles, known to the Aboriginal people as Kunjarra. It is, as the name suggests, a smaller version of the Devil’s Marbles that we had seen at Wycliffe Well. The Pebbles are a ceremonial site of women. Here, dancing and healing rites of the Munga Munga Dreaming 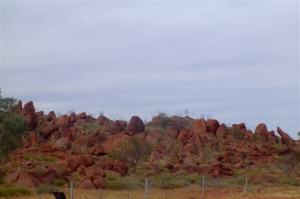 take place. These are important ceremonies for the Warumungu people who have been in this area for thousands of years. I particularly wanted to have a look at the Pebbles and we drove out there this afternoon but I must admit that I was a little disappointed in them. I don’t know what I expected but they simply don’t have . . . I suppose, the magnetism or the allure of their larger cousins.

With a few photographs in the camera we left the Pebbles behind but there’s not a lot to see and do here. We drove a few kilometres to the north of Threeways where we stopped briefly at the memorial cairn to the Reverend John Flynn, founder of the Royal Flying Doctor Service and the Inland Mission before 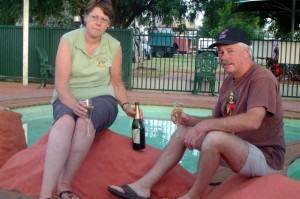 returning to camp where we settled down by the pool with our bottle of Two Tails Sparkling Wine. This was a little sad because instead of “first night bubbly” this was also for our last night in the Territory on this trip. The sun was setting on another beautiful day and tomorrow we would be on our way to Queensland for the next chapter in this adventure of ours. But for now we watched to sunset, listening to the sounds of the night as darkness settled over us like a blanket.

THE place to stop

Threeways Roadhouse is the perfect way-point. With accommodation ranging from camping sites to motel rooms, a swimming pool, and a restaurant/ takeaway with a licensed bar, it is THE place for weary travellers along the endless kilometres of the Stuart Highway.